It's Mersea Week and I have been given the high honour of judging the regatta children's art competition.  There are so many fabulous entries, choosing a winner is nigh on impossible.  It's a very tricky task indeed.

I am not normally known for my Liberal ways, but I have had to come up with a handful of 'highly commended's to ease my guilt for the equally brilliant children to whom I haven't awarded the winning trophy.

Prizes will be presented on Regatta Saturday at the official prizegiving, 7.30pm outside the Old Lifeboat Station (or in Peter Clarke's shed if it's raining). 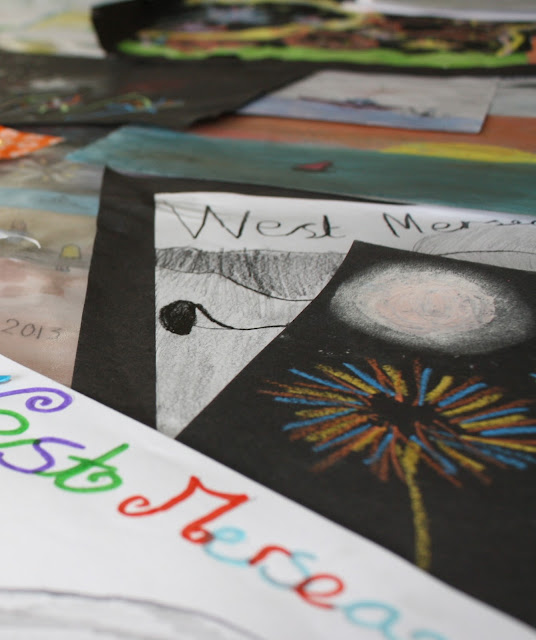 For a closer look, all the paintings and drawings will be on display on Regatta Saturday in the Victory marquee, Coast Road (marked by a pint of beer on my map).

We have a local heroine (from the 1800's) we all adore, called Mehalah.  Nicknamed Glory, she was strong and beautiful and lived a rugged life amongst smugglers and fishermen on the saltmarshes around Mersea.

She's a fictional character (in a book of the same name) but none-the-less real in our hearts.

If you haven't heard of Mehalah you might have heard of the hymn, Onward, Christian Soldiers.  Both were written by Sabine Baring-Gould who was rector of East Mersea church between 1871 and 1881.


I don't think Baring-Gould much liked his time in Mersea but despite his dislike, I want to add a quote from Mehalah to the bottom of the Coast Road map.  There is a gaping hole to the left of the logos that is crying out to be filled with some good words, and the Reverend Baring-Gould was very good at good words.

He wrote,
'Between the mouths of the Blackwater and the Colne, on the east coast of Essex, lies an extensively marshy tract veined and freckled in every part with water.  It is a wide waste of debatable ground contested by sea and land,  subject to incessant incursions from the former, but stubbornly maintained by the latter.'

He goes on to say,
'A more desolate region can scarce be conceived, and yet it is not without beauty.'

It is still that same flat marshy tidal estuary.  Think Dickens and the wild lands of Great Expectations.
Posted by Leafy at 14:21 1 comment: 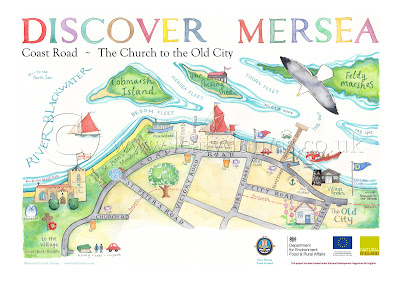 Here we go, at long last, my coastal map for the Council,  the beginnings of which I wrote about here.


The current plan is for it to be put on a board at the end of St Peter's Road.  I love our creeks and islands, we are riddled with them, lucky us.

*little footnote...
Watch that space at the bottom... I am hoping I am going to be allowed to put a magical bit of saltmarshy writing in there, more of which later!
Posted by Leafy at 09:04 2 comments: